If you wish to experience the history of modern Hellenism, then you should definitely pay a visit to the National Historical Museum! The museum is located in the Old Parliament House at Stadiou Street. There, you will be able to "take" a comprehensive look at the evolution of the history of modern Hellenism through the collections, historical documents, photographic archives, library covering a time range from the period of Ottoman and Frankish rule until the contemporary period. The revolutionary struggles for liberation, the War of Greek Independence, the creation of the independent state, and everything that Hellenism experienced politically, socially, and spiritually until today are imprinted on the museum's exhibits. 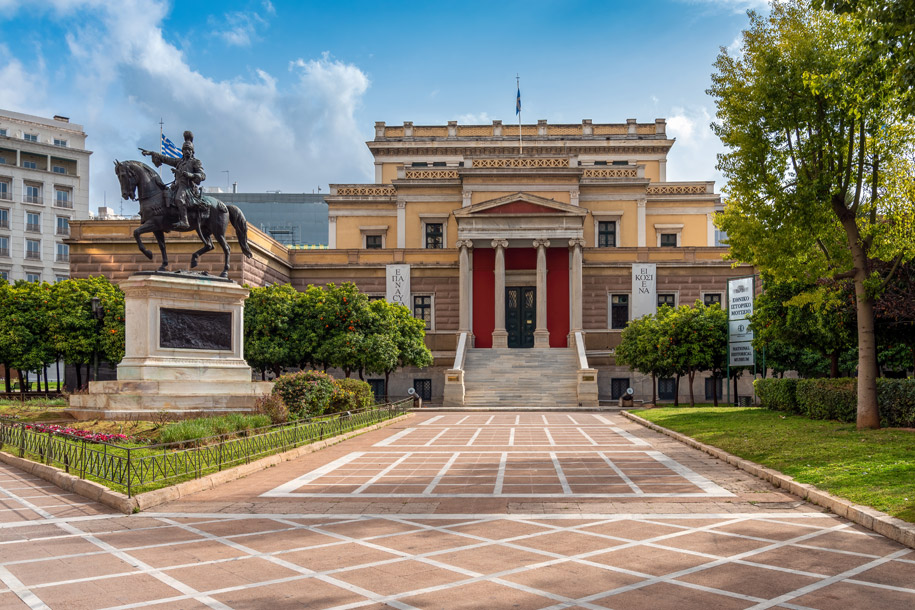 The Acropolis Museum is a museum of modern design, ready to take you on a unique cultural journey, with fascinating exhibitions, a true treasure of cultural heritage. Guided tours in the museum are full of interest. A visit to the museum's terrace and the cafe-restaurant, overlooking the unique Parthenon on the Acropolis, is a must. 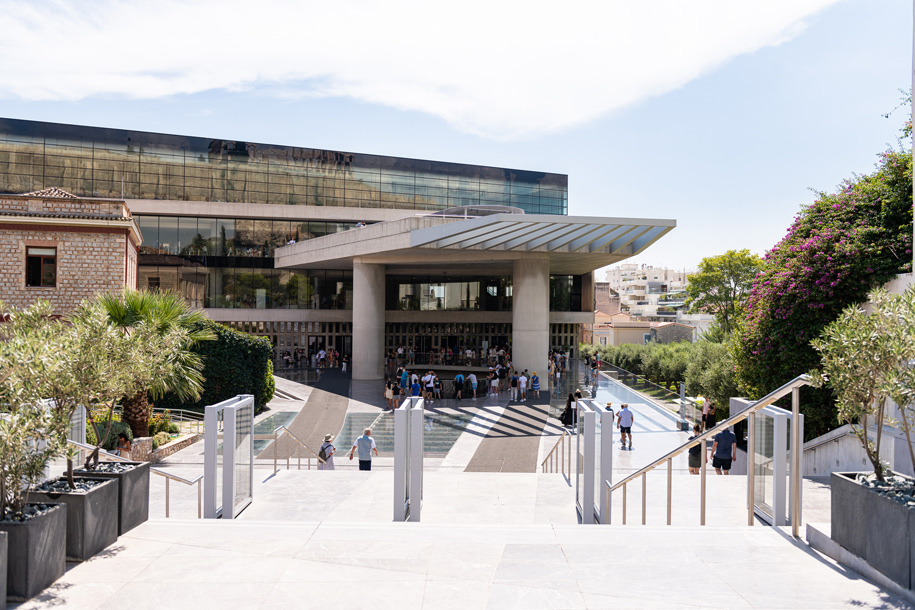 If you believe that we do not live in a world of illusions, the Museum of Illusions in the heart of Athens to prove you wrong! Live an unforgettable, fun, and educational experience, travel with your senses to a world where nothing is as it seems! Wander through the museum spaces, where you will experience the limits of sense and illusion in every exhibit and room. Do not forget to visit the museum's playroom, where you will not just have fun but... "exercise" your brain as well! 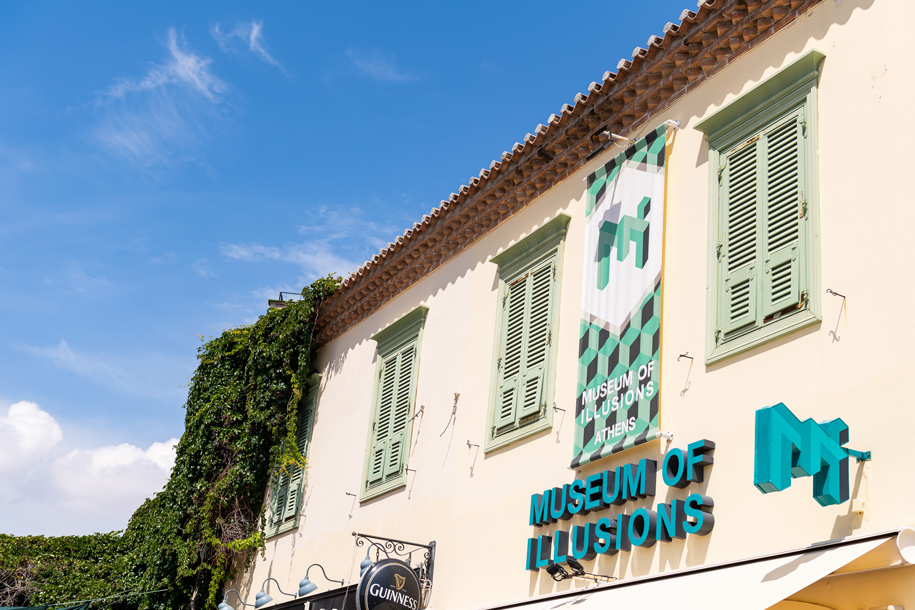 Under the Sacred Rock of the Acropolis, in Plaka, there is the Museum of History of the University of Athens. If the thirst for knowledge has always been your strong point, then visiting the museum will quench your thirst! Through the exhibits of the museum, the collections, the portraits of professors by renowned painters, the books, the photographs from the life at the University, the rare scientific instruments, and other relics of the University of Athens, you will discover aspects of the cultural and academic heritage of Greece. 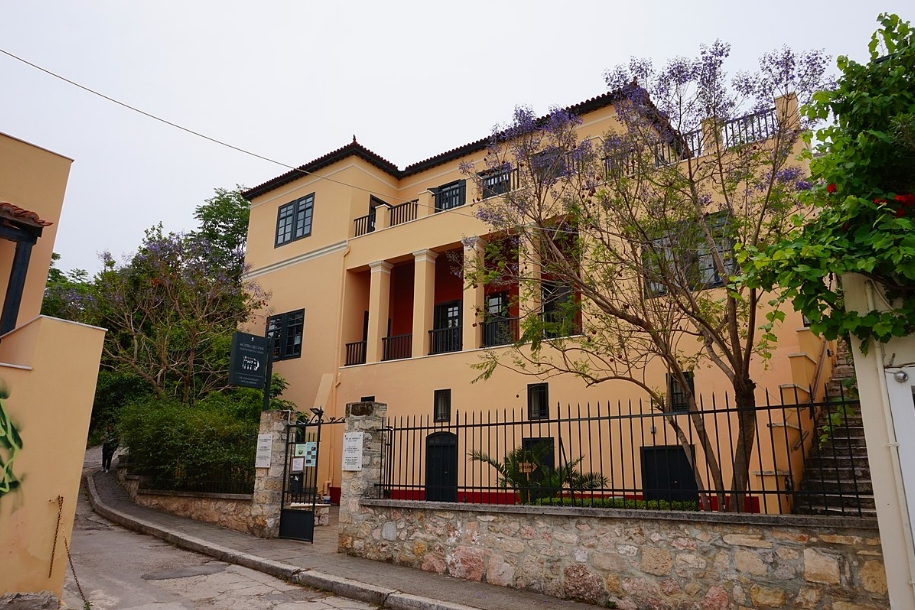 They say that if you do not know the art of a place, you do not know anything about its culture. Take the opportunity to experience the art of Greek civilization from the prehistoric period to the 20th century with a visit to the Benaki Museum. The museum is housed in one of the most beautiful neoclassical architecture buildings in Athens, near the National Garden and the Hellenic Parliament, in the city's heart. Browse through a unique, timeless exhibition and discover the art of Greek culture from antiquity to modern times through the extraordinary collections of finds. 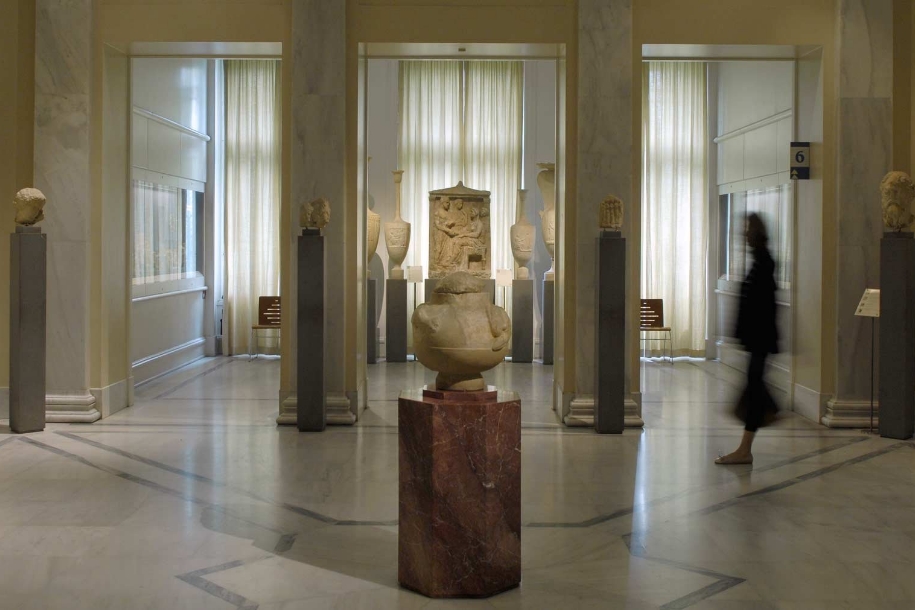 The National Archaeological Museum of Greece lies in one of the most central streets of Athens and, of course, visiting its premises is the number one choice for visitors to the cradle of Greek culture. In one of Athens's most beautiful neoclassical architecture buildings, the museum hosts most of the archaeological findings of the Greek area, allowing visitors to travel through space-time in a panorama of ancient Greek civilization that starts from prehistory reaches up to late antiquity. 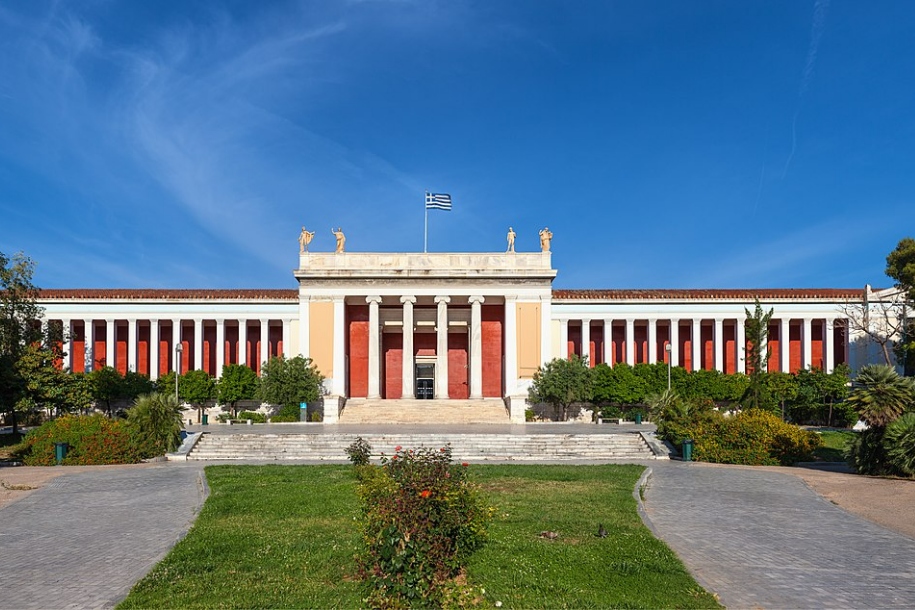 In the center of Athens, at the highest point of the Sacred Rock of the Acropolis, lies the Parthenon, the internationally renowned ancient temple that adorns the capital of Greece and which every visitor of the city needs to admire. It is the brightest monument of the Athenian civilization that stands unchanged throughout the centuries. During your visit to the Parthenon, you will have the opportunity to admire the all-marble temple, a high sample of architecture and sculptural art, navigate its spaces and admire the relief carved metopes, triangular pediments, and the imposing frieze that adorns the temple's cella. 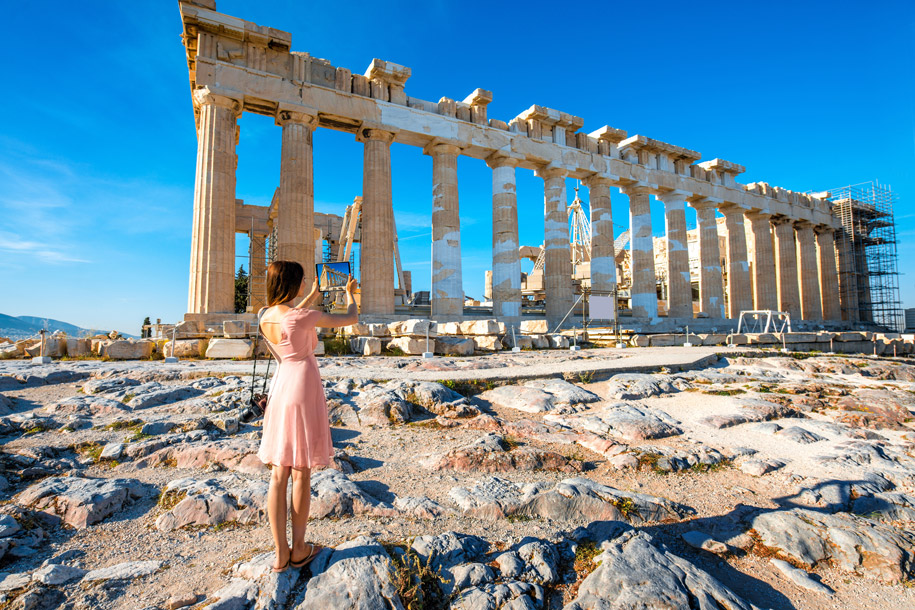 The Philopappos Monument, located on Philopappos Hill, dates back to 114-116 AD and was built by the Athenians in honor of the great benefactor of Athens, Julius Antiochus Philopappos, who settled in Athens and became an Athenian citizen taking over public and religious postulates. It is made of white Pentelic marble built in the same place where Musaeus had previously been buried. It rises in a purine crypt and bears rich architectural decoration. 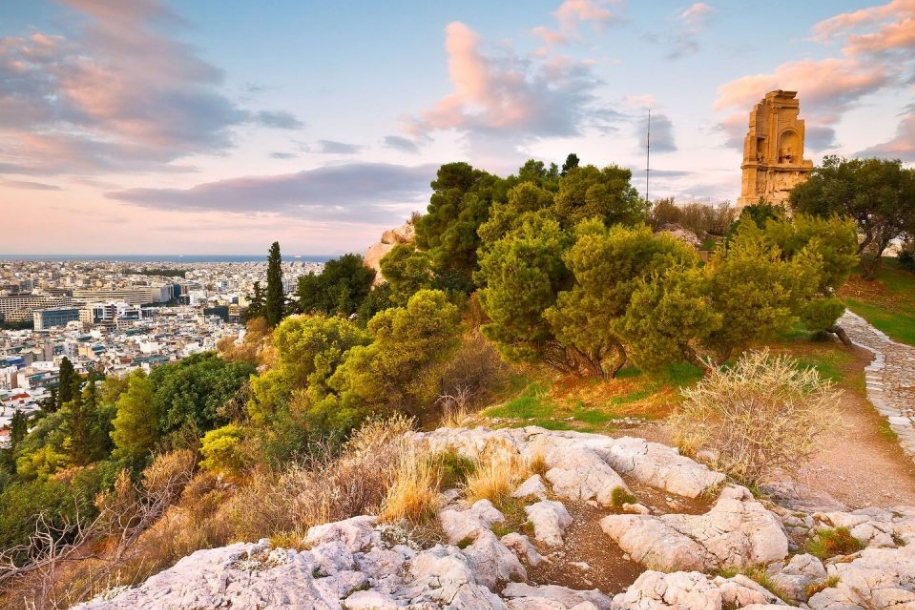 MONUMENT OF THE UNKNOWN SOLDIER

The Tomb of the Unknown Soldier is located in Syntagma Square, right in front of the Greek Parliament building. It was built in the 1930s and was created to honor the fallen in the wars. The sculpture depicts a naked male figure of a dead warrior lying on a rise of the ground. The dead warrior holds a shield in the left hand, on the head wears a helmet with his face turned. The artist's depiction of the body of the deceased gives the viewer the impression that the Unknown Soldier is resting alive, ready to get up. 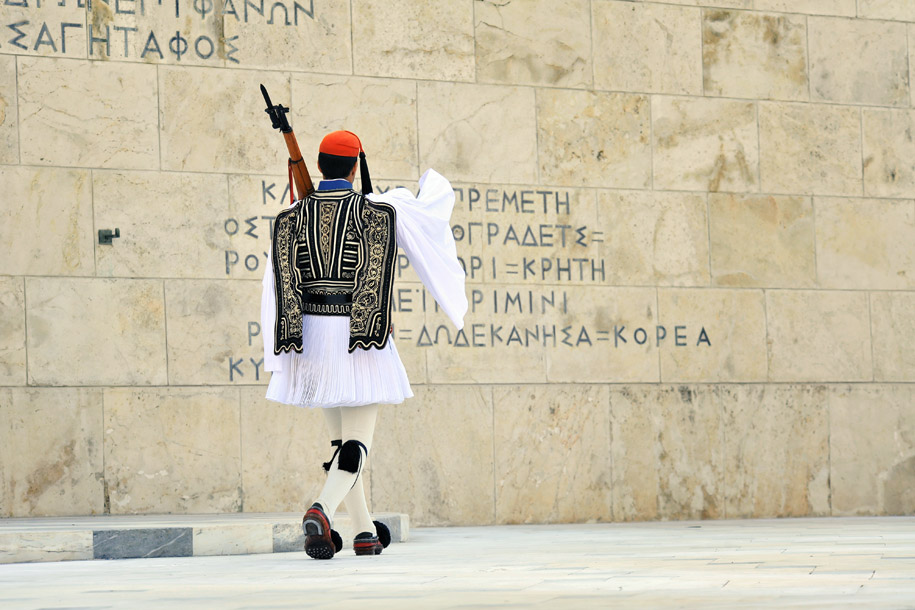 The Temple of Hephaestus or Hephaisteion is a temple dedicated to Hephaestus. It is Doric architecture and remains remarkably well preserved until today. It is located on the northwest side of the Agora of Athens, at the top of the hill of Agoraios Kolonos, and from the7th century until 1834, it served as a Greek Orthodox church of Agios Georgios Akamatis. The state of the building has been preserved due to the history of its varied use. 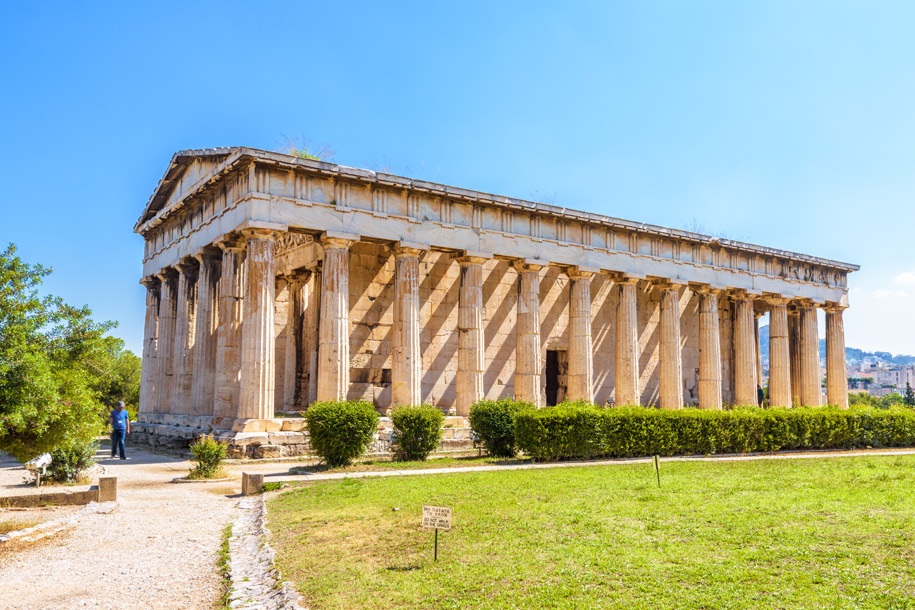 The privileged location of Enattica Syntagma Living accommodation allows you to visit the most essential parts of Athens without the need to use a vehicle, almost outside the hotel door!

Just a few meters away from the hotel, Monastiraki Square is full of people all day long. The square extends on the south side of Ermou Street, from the height of Mitropoleos Square to Thiseio Square. It is adjacent to the districts of Psirri, Plaka, and Thiseio.

Its name comes from the old church of the Assumption of the Virgin Mary of Athens, which is built on the square and formerly depended on a monastery and, specifically, the Monastery of Kareas on Hymettus. The old Tzistarakis Mosque also dominates the square, a mosque built in 1759 and which today houses a branch of the Museum of Greek Folk Art. 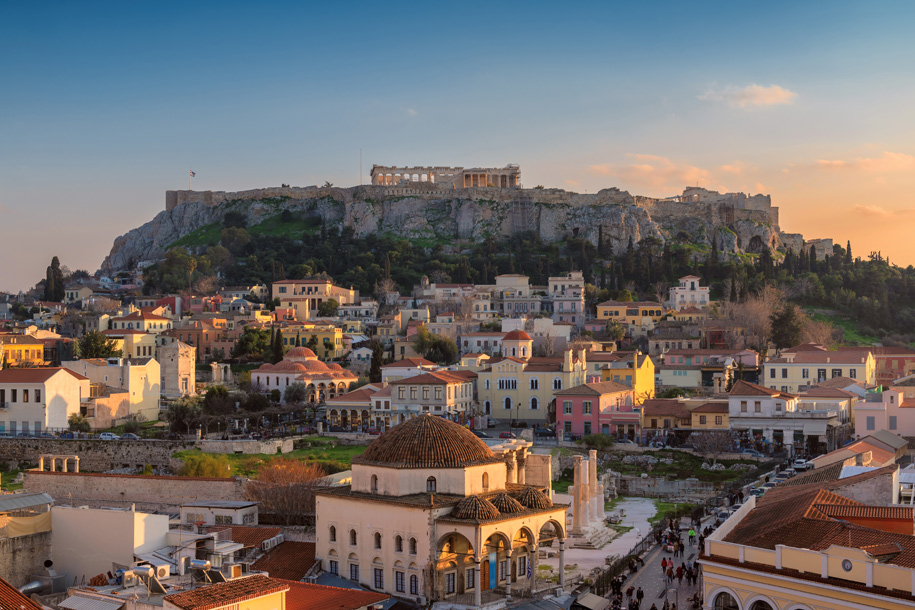 Abyssinia Square is a square between the commercial streets of Ermou and Hephaestus in Monastiraki, Athens. It is located in the historic triangle of the old city, bounded by Stadiou and Panagi Tsaldari streets, the urban center of Omonia in the north, and the Acropolis Hill in the south. Its name comes from the ancient name of Ethiopia, Abyssinia, probably because of the Ethiopians who used to live in this area. It is located in the heart of the small trade of the old Athenians, west of the traditional settlement of Plaka, south of the Psirri district, and east of Thiseio. The square has long been known for its permanent flea market of antique dealers, next to the auction house in Monastiraki and the well-known Sunday Bazaar, which began its operation in July 1912 with a special royal decree and continues to the present. 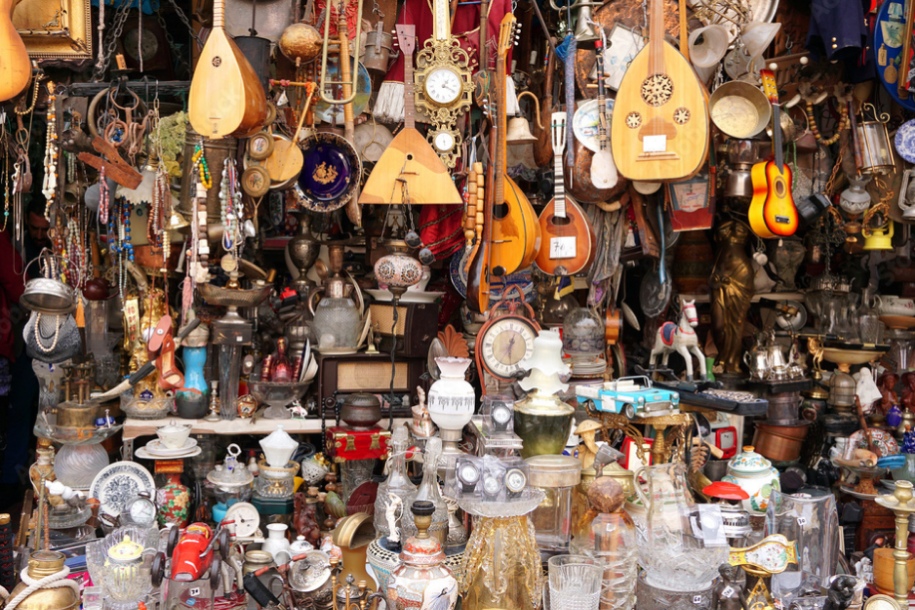 The small district of Psirri is located in the historical center of Athens and is one of the oldest districts of the city and one of the liveliest areas with countless entertainment options. It extends around Psirri Square or Plateia Iroon, which is led by the five crucial streets of the district: Miaouli Street, Karaiskaki Street, Agion Anargyron Street, Aristophanous Street, and Aeschylus Street.

The district is a picturesque and historic neighborhood full of shops, restaurants, taverns, and bars, ready to offer you unique moments of fun until the early hours of the morning. 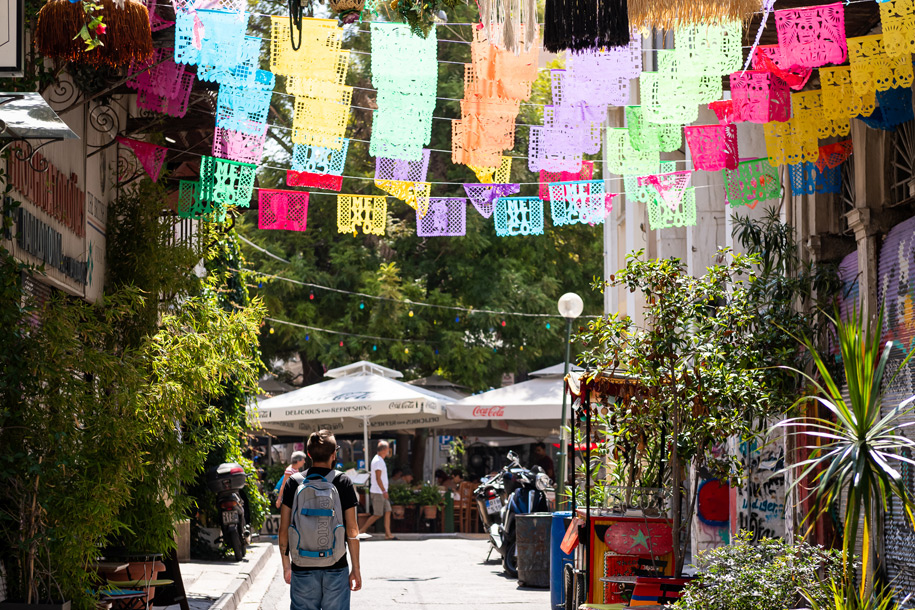 Ermou Street is a commercial street in the historic triangle of the old city of Athens. Although it was initially part of the small ring formed together with Stadiou and Panagi Tsaldari streets, with Athinas Street passing vertically, a large part of the road today is pedestrianized, serving primarily retail stores. Its name derives from Hermes, the messenger of the Gods and protector of commerce and developed in parallel with Hephaestus Street, where Athens operates the Auction House. It has a length of 1.5 kilometers. Ermou Street has been twinned with Okurayama Street in Kanagawa County, Japan, since 1988.

Ermou is located in the heart of the Athenian trade, with the Varvakeios Municipal Market in Athinas street and the open-air bazaar of antique dealers in Abyssinia Square being developed around the perimeter. It is a place of development of local trade over time and a historical point for promoting the middle class of merchants with Greek fabrics, shoes, clothing, and dowry items, due to its proximity to Metaxourgeio and the craft zone in the west of Athens. It is the fifth most expensive trading area in Europe and the tenth globally. 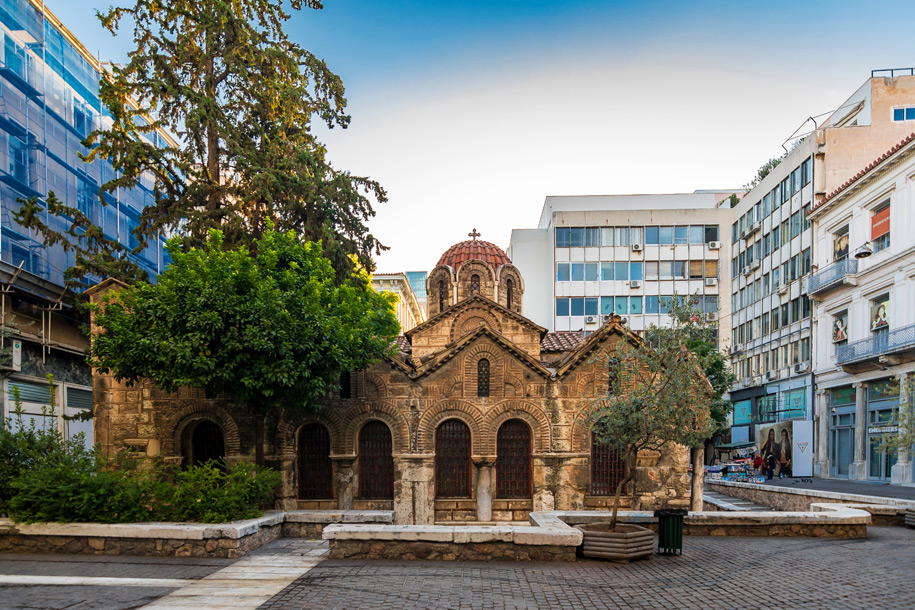 A classic meeting point of the Athenians is Syntagma Square, the "center", as they usually call it, the largest square of Athens, where the Greek Parliament dominates and the Unknown Soldier's monument. Starting from Monastiraki and going up Ermou Street, after shopping, stand in the square, admire the beautiful buildings and feel local, taking a coffee in hand and relaxing next to the countless groups of all ages that gather there as well as Stadiou and Vasilissis Amalias avenues that surround the square. 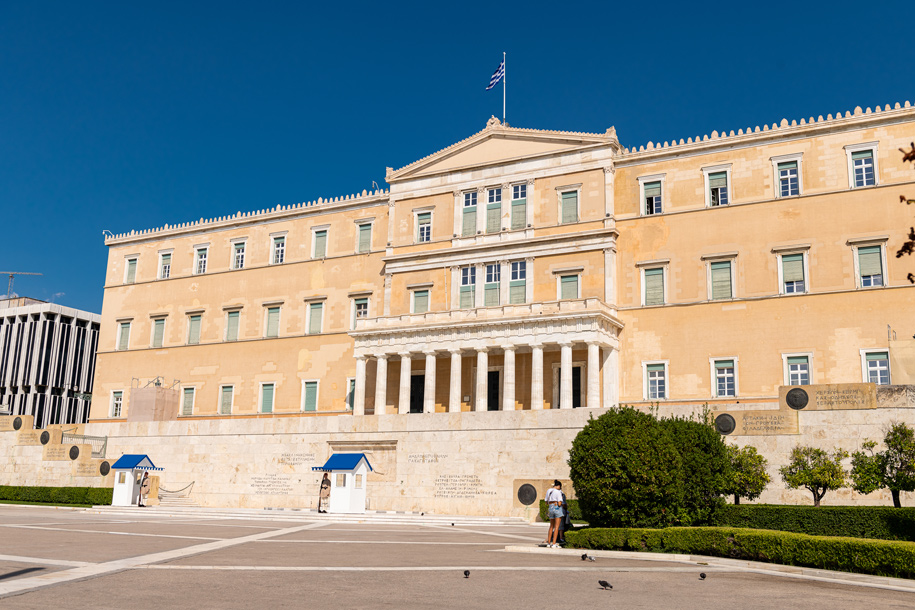